Everybody is asking what's going on, and I've obviously been too busy to blog (again), so DJ Carlos is going to have to stand aside a bit for the next week and a half, because this is where you'll get the scoop on the preparations for Trenchtown, in the run up to Electric Picnic 2013. For festival goers, it'll give you a little taste of the treats in store, and for artists, you'll get to meet the crew and see how everything is shaping up as we roll out the green carpet for your arrival. I'll be blogging my own journey to the festival as area production manager, as well as the Irie Ireland build up, and all the buzz from the performers as the biggest gig of the year rolls around again.

Yes, it's almost time to load the wagons and hit the road to Stradbally Estate again, as Trenchtown gets ready to open it's gates for the fifth year. The site crew moved in and started the build today, by Thursday most of the staging and structural work will be completed, and next week will see the artistic team sprinkling ragga-dust across the forest before the technical team arrive to light it all up and make the trees vibrate to the sound of the bass. Then it's showtime! Back in 2009, the show consisted of 2 live acts, and a Dj/MC line-up curated by Worries Outernational, who also brought their whopper Void rig. I remember it well...Myself, Aunty Shimmy and Mark Megahertz arriving drenched in sweat late Friday evening, (with Mark due to leave for New Zealand half way through the weekend), carrying crates of gear from the main gate in the pissing rain. Fun times! We all got a bit of a tingle walking into Trenchtown that Friday, and still get it, as every year the area and vibe grows bigger and brighter. Many of the artists also speak about the unique buzz of Ireland's biggest reggae showcase as being like a feeling of being "home", something even more true for the crew who have grown with the village. So home we go...

Five years on Trenchtown 2013 consists of three stages, hosting over 40 acts. Never happy to stand still, Martin Hickey (aka The Captain/aka Our Man In Jamaica/aka Mr. Trenchtown) has stepped things up again, secured more woodlands to fill with sound and dancers, and is busy with the Site Crew working on the new layout. It's one of the very few places at the festival where you can actually find seats and benches and take the weight off and chill for a while, so as part of the expansion we've created an new "Ambient Jungle" area where you can crash out and recharge, while a magical soundtrack from the trees transports you to Jamaica's "Cockpit Country", and distant transmissions bring you through the Island's history, and Ireland's 18th century links to the Caribbean (subliminal education kids...). This area will host the family activities during the afternoon, with drumming workshops, children's yoga and juggling/pyro shows to keep the younger ones entertained. Will Softly will be showing his gentler side, with his Sundance Kids disco, providing the soundtrack. We' are also very very excited to welcome back Revelation Sound, not for a DJ set, but to take up full residence for the weekend, this time with their stacks of Jah Tubby's high power! Hot from a string of Uk and Ireland festival appearances, Revelation will bring vital (and Ital!) roots, dub and concious vibes to the woods, along with a host of friends and special guests. Highlights will include a FOC187 DJ set, and the mighty Worries Outernational, Junior Spesh, Pressure Drop Soundsystem and World Bass Culture Crews.

Moving back in to more familiar territory, The Kingston 12 Cafe will host the Mr.Whippy Soundsystem, complete with 70's ice-cream van, chilling those minds with a tropical musical adventure, as Whippy and his team of crack collector selectors jamming with live musicians from early til late. The village streetscape and wall of fame will take you into the Trenchtown Yard, newly redesigned to ensure a pressure cooker atmosphere, with a second stage which puts the DJs in the crowd, and the live stage packed with much loved home grown heroes, and outernational guest MCs Soom T, Blackout J.A. and Mystro. You's truly will have the honour once again of opening the Yard with a DJ set at 6pm Friday. It's an honour that doubles as a sound check, and this year I'll be trading places halfway through as head noise-boy Mark Megahertz DJs his Picnic Debut. At this point we'll have had a good tweak at the sound, should be completely happy with all things technical, and it's time to unleash the beast upon the massive... More details on the goings on in the yard to come in a later blog!

Last year's cinema is gone from the Kingston12, moving outside the walls of the yard, in the form of a junkyard-drive-in. You'll be chillin' like a villain sitting in the back of the brand new second hand salvaged fleet, with a Jamaican Cinema programme running through the weekend.  The Jerk Shak (where the whole Trenchtown story started) will of course be back serving jerk chicken, rice'n'peas and the all important Blue Mountain coffee. 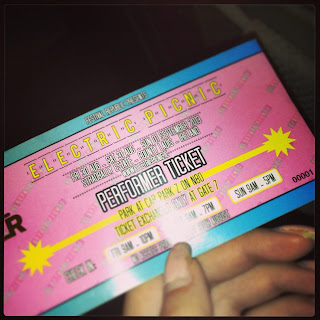 While on site the work order gets shorter as jobs are ticked off the list, back here in Dublin the pre-production has almost finished, with most of the performer passes having being delivered by The Cap this evening and heading out in the post tomorrow. First issued performer ticket for the whole festival went to Bevin Rimson, our youngest artist,  who'll be performing her public debut this year, having delighted crew, artists and VIPs alike with a wonderful private Sunday afternoon gig with house band T.T. Love in the green area last year. Not every day you get ticket number 000001, so here's the photo for posterity! This year you'll be able to catch Bevin with Count Ozzie's Ragga Children. It's not just pure luck either that the first batch issued ended up on our desk, as Shimmy has taken her military stage management approach to the accreditation game, and along with Artistic Director Donna managed to beat next of kin names and contact details out of all those otherwise engaged in and distracted by artistic pursuits, to get the dreaded paperwork over the line.

I have an assistant PM this year, with Dolly jumping out of her usual role in artist crew to ensure that I get a coffee break this year, woo-hoo! Dolly has spent the last year honing her event skills, and will be forever in my debt for ensuring that 22 hour shifts for Moi are a thing of the past. (Don't worry Dolly, I'm always on call, I got your back!) The main-stage team is back together again, with a few small changes... Dylan is taking on the lead Stage Manager post, and making sure that the no-late-starters record remains unbroken (no pressure). Also handling stage traffic will be the man who made us laugh the most at Body & Soul, the legendary Mr. Glenn Brown.  Front of house sees the ultr-calm Taran back again to join Mr.Megahertz behind the desk, bringing Mozy from the Energy Collective team with him for added calm efficiency. Vetran Picnic-er Emma will hold things down at back of house, handling the weekend's admin with new recruit Amy, and Rory takes to the road again, as the friendly face of artist logistics. A big thanks goes out to all the crew for their work so far through the year, Dawn for all the killer ninja PR moves, and special Big Ups also have to go to the Festival Republic Crew for all their love and support in the run-up...we're feeling it!

Stay tuned for updates as the big weekend draws closer, along with some little treats and teasers from the talent, and if time allows I'll be dropping a special Irie Ireland ting here, with a little of what to expect as we rock out a midnight show on the last day of the festival...BOOM!