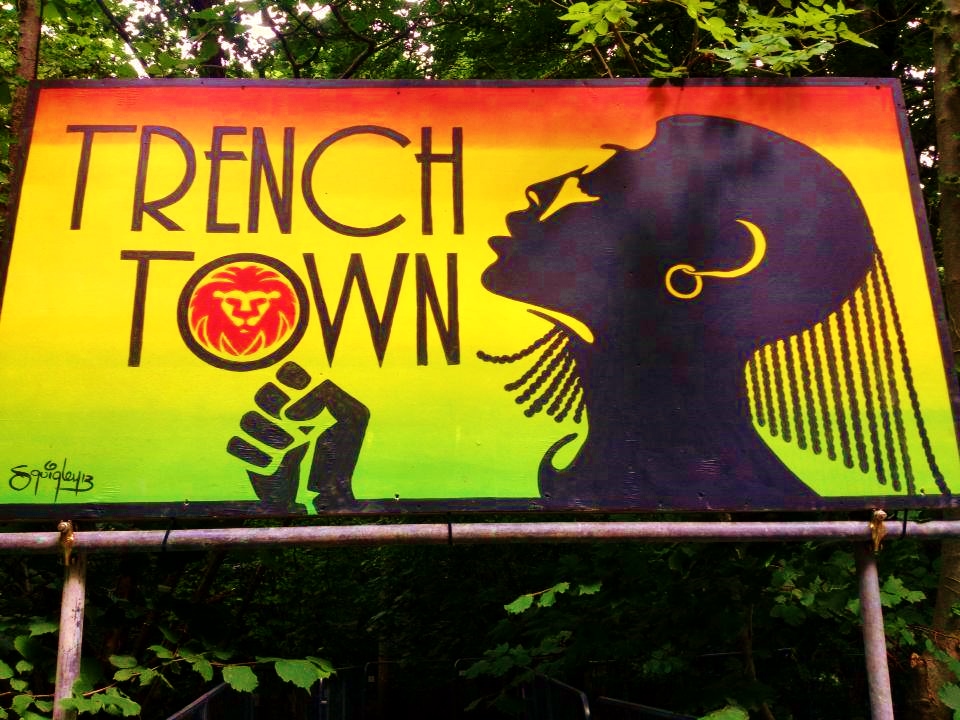 Greetings once again! Preparations continue on site, and we are blessed as you can see from the above, as Squigley has produced this work of art to onward beckon migrating festival goers over the bridge, through the woods, and into the One Love Vibrations of Trenchtown... Cheers to BigShow (Da Trenchtown Mafia!) for the constant stream of pics from site, and to Doc and The Cap for the same...the rest of the crew are getting itchy to get on site at this point too... Technical load in has been moved forward to Wednesday, due to logistical practicalities, so there'll be a lot more time to tweak and tinker before Friday.

The Jungle soundsystem shelter, to be inhabited by conscious roots Rastafari warriors Revelation Sound, is being built next, beyond the walls of the yard, among the trees, designed - rather aptly - on an Etheopian Coffee house. At the head of this project is the wonderful craftsman Mr. Christy Collard, well known for his work creating stages and structures for Body & Soul over the years. We are really stoked to have the opportunity to work with Christy, and can't think of a more fitting alignment, with Revelation holding residence there for the whole of the festival weekend.

Returning to things musical, Blackout J.A. has been in touch, with a few words for the Massive...

Back almost six months to the day since his first Irish appearance, Blackout hits the Trenchtown Yers stage at EP on Saturday night.  Since his hugely successful March show at Twisted Pepper in Dublin  with Irish Moss Records, Blackout has been busy, teaming up with reggae, breaks and junglist artists like Dirty Dubsters, Bluntskull and Run Tingz Cru, and slaying all before him.  To celebrate the Jamaican MC's return the Jamaican/Irish lable AYA Productions are releasing "Dancehall Emperor", a version on the AYA/Dirty Dubsters "Summer OF Dub" Riddim as a limited free download to fans and friends of Trenchtown E.P. Grab it while you can! If you miss it you'll be able to pick it up as part of the Summer Of Dub Riddim E.P. (also featuring Sista Quanna and Clinton Sly), due out on AYA later in the Autumn. Just download from the AYA Soundcloud page via the Soundcloud player below...

Trenchtown Saturday night headliners 'Dirty Dubsters' are giving Electric Picnic goers the chance to win signed copies of their album. 1 lucky person will win a limited vinyl edition while 4 more people will be chosen at random to win album on C.D. Visit Irish Moss label page 'Like' and post 'Fire It up' on their wall. Winners will be announced Thursday 29th.